“Kvutzat Avoda” (NPO) was established in 2011 with the purpose of developing and promoting original, independent and thought provoking theater, focusing primarily on advancing original and contemporary Israeli playwriting. “Kvutsat Avoda” Theater Ensemble, working under the artistic directorial supervision of Yigael Sachs, explores in its repertoire of original plays the relationship between truth and deception, reality and fantasy, through plays that deal with the changing cultural and political circumstances that Israeli society is going through. “Kvutsat Avoda” together with the The Hanoch Levin Institute of Israeli Drama is also responsible for the The Israeli Dramatists Website and manages The  Israeli Drama Development Fund,  that encourage Israeli playwrights to deliver uncompromising new plays, through projects such as “Starting Point” “The Playwrights Greenhouse,” and “New Voices” and cooperating with  “The Playwrights Project,” under the artistic supervision of Roei Reshef Maliach, Noa Shechter Golomb, Shai Shabtay and Daniel Botzer.
​ 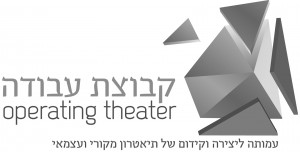