A British production of the play “Under the Skin“, by Yonatan Calderon, will take place on July in Women and War Festival in London. The play, directed by Ariella Eshed and produced by Tik-Sho-Ret theatre company, deals with an impossible love affair between a lesbian Nazi officer and a female Jewish prisoner in WWII. 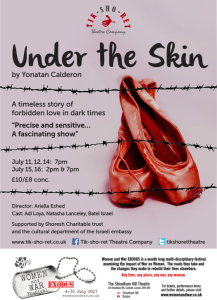